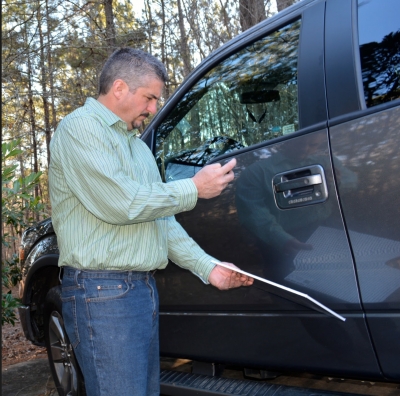 Tim Briggs, 44, and his wife, Ginger Briggs, are the owners of Collision Edge and the inventors of many products, including The Tape Thing, The Dent Viewer and The Estimating Kit.

These tools are designed to simplify basic tasks and make technicians' lives easier. Founded in 2014 and staffed full-time by Ginger and her sister, Pam Griswold, Collision Edge is located in the family barn in Chattahoochee Hill Country of South Atlanta.

Tim Briggs entered the collision repair industry as a distributor/rep for Fowler Color Company in Atlanta, GA, in 1996 after working as a painter and airplane mechanic for many years.

"I didn't know anything about the industry. I focused on learning one new thing every day and asked a lot of questions" Briggs said. "After that, I got a job working as a territory manager and did regional business development for PPG for a decade. During my last three years there, I managed their largest MSO account and there was a ton of travel involved. My young family needed a dad at home, so I decided to get back into distribution and went to work for a regional jobber to get off the road. My heart has always been in the shop, solving problems for customers.”

Today, Briggs is the Director of Strategic Development for National Coatings & Supplies, Inc. (NCS), where he works on numerous internal and external projects.  “NCS encourages employee innovation,” he said. “It’s such an awesome company.”

Briggs is always looking for solutions. Many of the tools that he has created came about while he was looking for a better way of doing things when visiting shops.

The first invention that Briggs developed was called the Estimating Kit, a simple invention that informs users how to precisely re-affix car emblems and stickers after a repair. "We were doing disassembly back in 2014 and taking emblems off a truck, but when the time came to put them back on there, we basically had to guess," he said. "Then, later when I was driving home, I passed one of the same types of vehicles on the road and I could see that I missed the right spot for the emblem by about six inches."

Briggs then started looking for a tool that he could use to avoid misplacing car emblems ever again.

"My wife had a laser engraving business at that time, so I took one of her magnetic sheets to create the first prototype," he said. "I went down in the basement that night and made the very first set of rulers. There are four different rulers in a set. They are designed to work in combination to locate the emblems and aid in photo documentation for justifying Blend Operations.”

Briggs began giving the Estimating Kit to his customers for free, and soon bigger and better ideas started entering his inventive mind, which led to The Dent Viewer.

"I spent a lot of time working with shops to improve processes,” he said. “I was at West Georgia Paint and Body one day, and my friend and owner [of the shop] Tim Wilkerson was trying to take a photo of a dent. He was moving the camera all around, and I was wondering what he was doing. He told me he was trying to get the ceiling grids in the picture, because the insurance company won't pay for dents unless they see them in the photos. So I went home that night and started coming up with the idea of The Dent Viewer. It was originally a plain white board with black grid stripes on it, and it worked okay. I made about 50 of them and gave them to all of my customers because I knew it solved their [dent viewing] problem. I wasn't in it to make money---I just wanted to help my customers and make their lives a little easier."

Like most great inventions, they evolve as users provide invaluable feedback to their creator over time.

"One day, an estimator called me and said he couldn't get a good photo of a car, so I drove down there and it turned out to be a white car," Briggs said. "So at that point, we decided to paint the other side of the board in black with white lines so they could use the device with white vehicles."

After that, Briggs refined The Dent Viewer even further, adding a reflective film to the white side that illuminates grid onto the panel with the camera flash. He finally had his final version to share with his customers.

Today, The Dent Viewer comes in two sizes and is a big seller with shops and insurance companies alike, Briggs said.

"The big four insurance companies really like The Dent Viewer, because they normally have big problems getting good photos of damage,” he said. “The field adjusters and shop estimators love it because they get fewer calls on photo quality from desk reviews, plus it’s a huge time saver to not have to retake photos after the estimator realizes his pictures aren’t detailed enough.”

Previous Page Next Page »
More in this category: « Techs of Tomorrow: LA Graduate Commuted 1 Hour for 12 Months to Study Collision Repair Vehicles Abandoned at Body Shops Are Unwelcomed Guests »
back to top