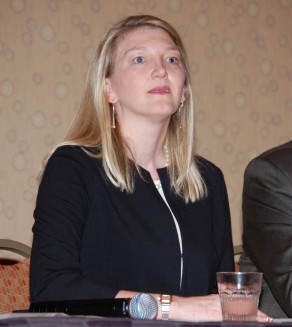 This presentation focused on the liabilities shops are open to currently, how shops can protect themselves and tips on getting paid for proper repairs. Eversman took time to discuss some of the key points of her presentation.

According to Eversman, “The most important thing for shop owners to remember is that they are the professionals. They are responsible for making decisions, and they are subject to the burden of resolving issues with the consumer or insurance companies, whether it’s related to imitation parts or something else. If it’s not a safety concern; the customer can make some decisions, but shops need to stand firm on safety issues.”

Referencing Burg v. Nationwide, Eversman recounted the horrific tale of a newly leased Jeep Cherokee which the shop declared a total loss; however, the claim representative argued and coerced a repair since the insurer would lose money on the total loss. The repair took four months, but the insurance company only paid for 30 days of the customer’s rental car. Eventually, the vehicle was returned to the consumers, but the shop was concerned about it being unsafe, and one of their technicians called the customer to warn them.

Eversman stated, “It’s a long story with very bad actions taken on the insurer’s part. The shop did the right thing at the beginning, but gave in to insurer pressures fueled by their fear of losing $12,000. The customer had to drive an unsafe car for three years, and Nationwide bought the vehicle at the end of the lease. In the meantime, their decisions put everybody at risk, and the situation could have been resolved early on if the shop had held firm in their professional opinions. Ultimately, these types of calls are the shop’s, no matter how involved they are with the insurer.”

Another current concern Eversman has recently noticed in the industry is an increase in photo estimating. Although she did not get to address this in her presentation, she discussed some of her observations with Autobody News. This trend is in line with modern cell phone usage and certainly has a convenience factor in immediately documenting the accident and providing an estimate before disassembly; however, Eversman observed, “We all know that the visible scrapes and dings aren’t the extent of the damage, so the vehicle still needs to be properly evaluated by a collision repair professional. Photo estimating doesn’t really speed up the actual repair process.”

Discussing how shops can protect themselves against liability concerns, Eversman recommends utilizing good paperwork. An example would be an indemnification and hold harmless claim if the customer insists on using a part that the shop is uncomfortable using, but it’s imperative that the shop have both the customer and the insurer sign this document. Eversman also suggested that shops ensure their DRP agreements are approved by their garage insurers, and she warned them not to warrant imitation crash parts since that exposes the shop to federal Magnuson-Moss Warranty Act liability.

Eversman offered this advice to shops interested in receiving proper compensation for repairs performed: “Be consistent and always make it a streamlined process. You need to be able to tell the insurer ‘we always charge for that.’ Shops also need to make a point to raise their labor rates on a consistent basis, regardless of what the insurance company says, ensuring rates are appropriate and reasonably profitable. Send notices about rates by certified mail on an annual basis – it’s a matter of conditioning the insurers just like they conditioned the collision repair industry.”

When an insurance company refuses to pay for a process, shops should use a standardized document requesting that they identify the part of the policy that indicates coverage doesn’t include that item and the consumer has to pay out of pocket. Eversman stressed, “They are obligated to pay what’s in the policy, and if they neglect to identify what they won’t pay for, they are stuck.”