Shop Owner David Ludwig Uses His Art to Give Back 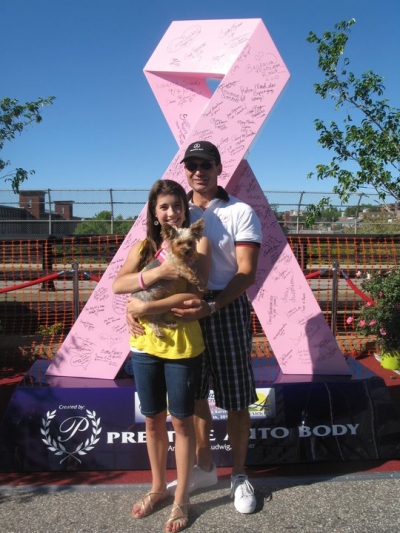 Dave Ludwig and his daughter, Elizabeth, stand next to Ludwig's first sculpture, a 9-foot pink ribbon that he designed with a local radio station to create awareness about breast cancer in New Hampshire.

Dave Ludwig, 58, owns Prestige Auto Body in Manchester, NH, a shop he started with just one helper back in 1986.

Today, he has 24 employees and is well-known for his quality repairs, but many people in the community also know him as someone who isn't afraid to help others through his art. By creating a series of incredible sculptures, Ludwig is building his philanthropy in a creative way that continually helps the charities he chooses again and again.

Always willing to help, Ludwig determined many years ago that he could use his unique artistic ability to help causes and organizations.

"It's so much more meaningful to use my art to help these nonprofits, as opposed to just writing a check," Ludwig said. "Anyone can give money and there is nothing wrong with that, but using your hands to make something that people will appreciate while raising money for the cause---how can it get any better than that?"

Giving back to his hometown is a big deal for Ludwig, he said.

"I was born and raised right here, so we donate to and support as many worthwhile organizations as we possibly can, including cancer associations, programs that support single homeless parents and local drug education and support groups,” he said. “These charitable efforts have allowed us to build a positive reputation and establish credibility as a business."

Some call Ludwig's creations sculptures or structures, but everyone agrees that they were created for a good cause, and surely qualify as art.

"We do them for different community events to raise awareness, but we also do them to show people that good body techs are more than just wrench turners or guys who just slap bondo around," he said. "Whether it's their paint work or metal work, it's amazing and these people are indeed artists."

Nearly a decade ago, a local radio station met with Ludwig and asked if he could be a sponsor for a big fundraising event. That's when his artistic journey began.

"They were looking to do something different, so I said, ‘Let's brainstorm and see what we can come up with," he said. "Our first piece was a large 9-foot pink ribbon made of aluminum that we did for a breast cancer nonprofit. When we unveiled the ribbon at the very first event, we saw the response, and it was pretty awesome. Since then, the ribbon has been to a lot of breast cancer-related events, and so many cancer survivors have signed it."

Ludwig and the radio station came up with the idea of having cancer survivors sign the sculpture, making it a piece of art that will continually help the charity by spreading its message.

"At that first event, I was able to meet so many survivors and hear their stories as they signed the ribbon with their names and their years of remission," he said. "It was an amazing experience---one I will never forget."

Ludwig's second project gained significant attention for its creativity and "Bust Bank," which is a white bust wearing a pink bra that's actually a bank.

"It's 8 feet tall and 7 feet wide, and surely our most ambitious project to date," Ludwig said. "It has a clear glass door on the back so people can see how much money is being donated."

"The butterfly represents hope and is made out of foam core covered with aluminum," he said. "The wings are removable, and the whole structure breaks down easily so they can travel with it to other events.  I am currently working on another piece for them."

With an eye to possibly get out of the body shop business by age 65, Ludwig does not call it retirement, but rather a change of careers.

"I have no desire to retire,” he said. “So when I step away from the shop, I will continue doing my creative endeavors, whether it's making furniture or sculptures or even making high-end gold carts for people in Florida---who knows?  I have to do something that stimulates me, and the art really does that."

View the embedded image gallery online at:
https://www.autobodynews.com/index.php/bodyshopsgivingback/item/13611-shop-owner-david-ludwig-uses-his-art-to-give-back.html#sigProId2d3264718d
back to top