The Best Body Shops’ Tips: Best Practices for Photo Documentation: 10 Tips on How to Capture Useful and Relevant Images 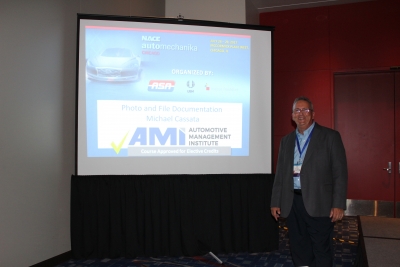 One of the many important steps in the claims handling process, according to Mike Cassata, owner of Hammer Insights, is proper photo and file documentation.

During NACE Automechanika in July, Cassata explained how to capture useful and relevant photographs that show the vehicle’s damage, or lack thereof.

“Photos are a real and necessary part of the complete claim file,” said Cassata. “DRP managers will tell you that poor photos and documentation can be a bigger problem than the quality of the repairs.”

He shared insight with attendees about the correct process that the majority of carriers want to see, although the rules may vary from carrier to carrier.

While working through the inspection process, Cassata said there are two important photos to capture in addition to a legible one of the license plate: the VIN sticker on the door and the dash instrument gauges with the car running.  This will not only identify any Malfunction Indicator Lamps (MIL), but also other systems, mileage and fuel level.

1) Observe the direct and indirect damages, then walk around the vehicle once or twice before beginning to take photos and writing the estimate.

2) Use the catcher’s position to take photos and refrain from kneeling to protect your knees.

3) If you can’t squat, find an alternative method that is comfortable for you.

5) Use sunlight and shop lighting to your advantage and remove excess snow from the vehicle.

6) Fill the entire frame with the vehicle.

7) Parking lot lines can help accentuate damages in the images.

8) Include worn or trashed interior photos

9) Take your time, and make sure you aren’t including the vehicle owner, family members, pets or your own reflection in the photos. Review the photos prior to uploading them.

Regardless of the extent of the damage, Cassata said there are five angles required for all front-end claims: the front of the vehicle straight on, the right-front corner, left-front corner, and both sides. Photos of the rear damage are captured in a similar way and include the right rear, right center, left rear and both rear sides. Side damage photos should be taken using a panoramic view with multiple angles from front to rear.  After panorama and prior damage photos are taken, Cassata said it is often necessary to take photos of specific damage.

In the event of a comprehensive loss, also known as “other than collision” (OTC), there are additional photos to take such as animal hair or remains in the event of an animal loss. If there was a fire, Cassata said to try and locate the origin and include your remarks in the comment section.

“The cause of the fire is not covered, but the ensuing damage is,” he explained.

In cases of vandalism or theft, Cassata said the damage is often random and not specific to one area of the vehicle.

“Regardless of the damages, photograph both sides of the steering wheel and all possible points of entry such as door locks, door frames and glass,” he advised. “Remember, lack of damage in these areas can be just as important to the investigation as actual damages.”

Photos are also required of the electronic equipment and console area. Cassata said to take time to note if the sound equipment was removed surgically or in a hurry, causing damage to the dash. He recommended taking a wider view of the front occupant compartment since it will often show additional damage to the dash, seats or removed parts left behind by those who vandalized the vehicle.

“Most will tell you that it’s usually up to the dash before they will total a vehicle,” said Cassata.

In addition to removing the interior and trunk trim and carpets, he said to dry out the interior before mold and mildew appear.

Salt water losses, according to Cassata, are usually deemed a total loss by a carrier if the water is over the rocker.

“It’s much worse than a fresh water loss due to the corrosion,” he said.

However, he said the water line could be higher than what shows on the interior on both salt water and fresh water losses.

Many insurance carriers will ask for a total loss evaluation, and may even pay a DRP partner for this service. Cassata said to be thorough, accurate and include all of the options and relevant information.

“Proper photo technique is necessary for the claim file,” he said. “You are the appraiser of record and the payment to the policy holder will be based on your report.”

In addition to taking photos of the VIN, gauges, actual damages and corner views, Cassata said all total loss vehicles require additional images such as vehicle options and front and rear interior views.

Supplementary photos are often taken after vehicle disassembly. Since they can be difficult to decipher, Cassata recommended getting close enough to capture the damage, but remaining far enough away to provide some context as to the location of the damages. At least one photo of the license plate must be included as well as an undamaged part of the vehicle.

Insurance carriers often have their own requirements on how to document air bag deployments. In general, Cassata said the procedure is to include your initials and the date on the air bag with a permanent marker before taking a photograph.

“This practice will reduce fraud,” he said.

The full claim file is discoverable in court, which means it could be utilized in a court proceeding or other legal matter. It could also be used heavily in the decision-making process of settling the claim. Cassata said that every comment, line note, entry on the estimate, photo and entry in the portal must be turned over to the court when there is litigation.

He recommended maintaining a folder on every vehicle you repair as well as a chronological record of the activity. He also suggested ensuring all comments pertain to the file in case you are called upon to testify.

“You are the eyes and ears of the carrier, so be sure to give them every opportunity to settle the claim fairly and responsibly by doing your part to supply the best photos and written documentation possible,” said Cassata.

This article was based on a presentation by Mike Cassata, Hammer Insights, during NACE Automechanika 2017. For more information, call (585) 794-0914 or email hammerinsights@outlook.com.