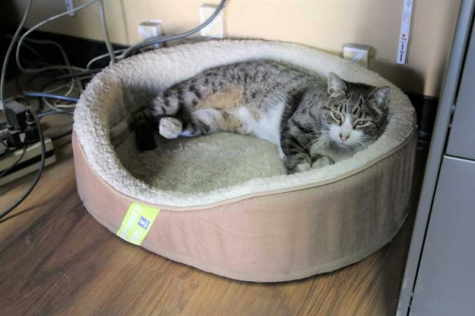 When I started covering the collision repair industry 15 years ago, I was writing for an automotive publication where the editor didn’t like pets or animals in general.

I began noticing many shops---both collision and mechanical---had animal mascots, mostly dogs. Since I love animals more than Dr. Doolittle, I would often include a picture of a shop’s dog mascot with one of my stories.

This particular editor would invariably crop them out. “We are not Pet Fancy magazine," he would remind me. Fortunately, the publishers of Autobody News are animal lovers, so I get to write this.

For years, I have been thinking of producing a calendar featuring auto body shop dogs and calling it “The Canines of Collision.” Recently, I reached out on social media to find out how many collision repair shops have pet mascots on-site and the response was phenomenal.

I got a ton of great pictures of dogs in shops all over the country. There were even a few photos of shops with unusual animal members of their crew, including a chicken, a pig and get this---an iguana!

Some dogs seem to enjoy the hustle and bustle of a busy body shop, while others prefer to find a comfortable doggy bed and sleep throughout the day in a corner somewhere.

To find out which breeds are better shop mascots, I asked Johan Van Olden, a world-renowned dog trainer who owns a company called Canine Trade Group in Delaware that trains other dog trainers.

He said German Shepherds are ideal for a body shop environment because they are smart and remember faces. Beagles are inquisitive and a little dopey as a rule, so keep them in your front office and away from paint products, etc. Collies and Labs are ideal for body shops, Van Olden said, because they’re laid back and are less likely to bite insurance adjusters. Recently, a shop manager in Santa Clara, CA, told me a story about a cat that resonated with me because I love happy endings, and this "tail" surely has one.

In May 2013, a gray cat started showing up at Anderson Behel, a body shop in Santa Clara. As a feral feline, he was content living on the streets, wailing at the moon at night and mostly sleeping in the bushes during the day. The shop’s crew started putting food and water out for the cat once they noticed him, and named him Anderson.

Jeff Blackmun, the shop’s production manager, is a pet person who has had numerous pets during his life. When he first noticed Anderson was hanging out at the shop, he could clearly see it was a feral cat that wasn’t crazy about humans.

“We tried to make friends, and he drank the water and ate the food we left out for him, but we couldn’t even get close to him,” Blackmun said.

Then one day, Anderson started looking wobbly and Blackmun noticed this filthy cat had a skin infection on its fuzzy face. This led to some visits to the vet and eventually the crew at Anderson Behel began thinking about finding a forever home for Anderson. His kitty skin issues led to a visit by a representative from an organization called Fat Cat Rescue. A very nice cat lady knew exactly what to do, and gave Blackmun some topical medication to take care of what was ailing Anderson.

Blackmun was shocked when Anderson let him apply the medication to the infected area, as if he knew that he was trying to help him rather than catch him. After that, Anderson began bonding with some members of the crew. He started begging for food from the techs and pretty soon he was coming into the shop’s reception area, Blackmun said.

“Before that, we couldn’t get near him. During the day, he would walk around here and sleep in his little bed. But, at night he wanted to go back outside and be a wild cat. Then, in the morning he would be waiting for us to let him in.”

Pretty soon, Anderson was a big favorite with the crew, customers and visitors. He wasn’t afraid to say hello to everyone coming through the door, regardless of whether they owned a Hyundai or a Tesla. When people came back to pick up their vehicles, they began asking about Anderson, who was more than happy to share a few meows along the way.

By now, Anderson was officially the shop mascot after a brief ceremony in which ceremonial milk was spilled. Once he knew he was in charge, Anderson changed his sleeping schedule in order to perform his daily security checks and make certain all repairs were being performed using only OEM parts and procedures.

One morning, Blackmun and some of the crew noticed Anderson was in bad shape. He had been attacked by something, likely a stray dog or a raccoon. His front left leg was broken in several places and things didn’t look good for him.

But the people at Anderson Behel stepped up and got him some excellent help, in order to be return him back to his pre-accident condition. At that point, everyone at the shop agreed that Anderson should transition from being a body shop mascot to a house cat.

Today, Anderson lives with Blackmun and the rest of his family in beautiful Felton, CA, with his menagerie of other cats, dogs and assorted animals.

“He’s the coolest cat you could ever meet,” Blackmun said. “He is spending his senior years in the sun and thinking of taking some I-CAT classes to stay busy.”

If you have a body shop mascot, send me a note at era39@aol.com and maybe we can help your dog or cat to get its 15 minutes of fame. We’re especially looking out for felines who are aluminum trained or dogs who will work for kibble.