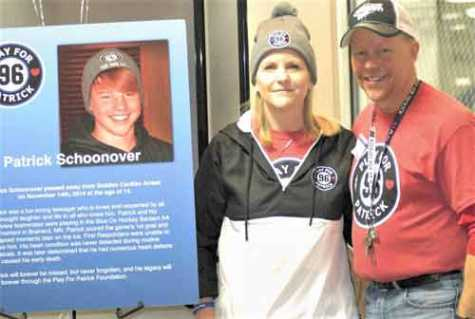 If you’ve ever been in the Minneapolis area, you’ve likely heard of Schoonover Bodyworks and Glass in Shoreview, MN, which recently celebrated its 82nd anniversary.

When this third-generation business opened its doors in 1938, Packards and Buicks were popular with drivers, while a new car named the Volkswagen Beetle hit the market.

Owner Mike Schoonover’s grandfather began the business. Mike's dad took it over in the 1970s. Mike took over the reins in the early 1980s and has been at the helm since.

The shop has grown steadily under Mike’s direction, and, with the help of his wife/co-owner, Gayle, and their 14 employees, they fix roughly 150 vehicles every month. But, as we all know, especially now, life can often change in a millisecond.

Patrick was an excellent hockey player and loved playing it. Many were saying if he progressed and worked hard at his game, Patrick might be able to play at a higher level, because he was a fast skater and a prolific scorer.

After scoring the game’s first goal and celebrating with his teammates that day in Brainerd, Patrick suddenly collapsed on the ice and died, after first responders attempted to revive him unsuccessfully.

It was later determined Patrick had numerous heart defects that caused his early death.

“We had no warning,” Mike Schoonover said. “He had four doctor visits within a two-year period and he was fine. Once in a while, he would say that his legs were sore, but we figured that was just growing pains.”

Patrick was a fun-loving teenager who was loved and respected by many, his father said.

“Patrick was a gentle giant,” a tribute to Patrick stated. “He was the ‘anti-bully’ at school and stood up for those who could not. He made kids feel welcome with his smile and kindness. He was a great teammate and brought laughter and life to the locker room.”

Since Patrick’s heart condition was never detected during exams or physicals, the Schoonover family began working with the University of Minnesota Physicians Heart clinics to educate and inform families about heart defects and to help make heart scans more accessible and affordable.

To remember Patrick and hopefully save other peoples’ lives through early heart screening, Mike and Gayle started the Patrick Schoonover Heart Foundation.

"Patrick’s passing stopped the world of Minnesota youth hockey and forever changed our lives,” Mike Schoonover said. “With the Patrick Schoonover Heart Foundation, we hope we can reduce or eliminate sudden death due to heart defects and save other parents from the pain and anguish we are feeling.”

From August 2015 to February 2020, the Patrick Schoonover Heart Foundation conducted 22 "Play for Patrick" youth heart screens. They screened 3,643 kids, finding 226 with elevated blood pressure, with repeated checks, and 249 with abnormal electrical or structural heart defects. They taught CPR and AED awareness to 3,333 kids and adults, and donated 11 AEDs to area schools.

What started out as a tragedy has turned into an incredible experience, because it’s based on compassion and saving lives, Schoonover said.

“One of our main goals is to focus on education and awareness about heart defects," he said. "We hope families will talk with their doctors and get the whole family tested, so tragedies like this can be avoided.

"We look forward to Patrick continuing his work of helping others for years to come, as we keep his name alive through his foundation.”