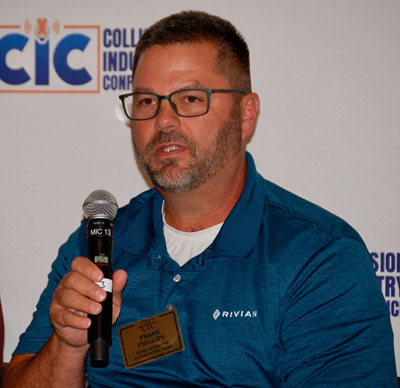 CIECA’s annual conference in St. Louis in September included presentations on new electric vehicles, ADAS calibration trends and what may lie ahead in terms of direct repair programs.

Greg Peeters of Car ADAS Solutions predicted it won’t be long before the majority of vehicles repaired by the collision industry will require some type of system calibration.

Peeters’ company operates stand-alone calibration centers and assists those looking to launch one. He said he’s often asked whether vehicles will eventually self-calibrate.

“I can tell you on even the newest technology, they don’t,” Peeters said. “The average age vehicle in a body shop right now is 6.2 years. So we’ve got quite a runway before we’re going to see self-calibrating cars. I will tell you what we’re also seeing in the field is sensor degradation. You take, for instance, a camera lens on the front grill or a mirror. It’s experiencing a whole lot of car washes, sunlight, sand and gravel, and it no longer sees the way it once saw. I think diagnosing and replacing failing sensors is right around the corner.”

Also at the conference, Bill Brower, vice president of industry relations for Solera, said he foresees “a pretty major redesign” of direct repair programs as the next big change coming to the industry.

“The days of [the customer] being introduced to the shop and going over for an initial estimate, and then going back over to take the car in for repairs and being taken by the body shop to the rental car company, I think that whole process becomes digital,” Brower said. “The customer is very comfortable taking the pictures. So I think the future is the DRP shop receiving a package of photographs, an AI estimate, and they’re going to make a decision at their desk before they call the customer: ‘Do I even need to see this car in advance, or can I digitally schedule the customer in for the repair?’

"Think of the impact that that would have on business if you could take a lot of that front end work away," Brower said. "To me, the biggest next step is really digitalization of direct repair, especially the assignment process.”

The two-day CIECA conference also included a panel of automaker representatives discussing electric vehicle repair. Jake Rodenroth of Lucid Motors said anyone in the industry can get some information about his company’s vehicles to give first responders in their market.

“I went to our fire department and told them I work for a car company you’ve never heard of, and I’ve got a towing guide and a first responder guide that I would love to share with you,” Rodenroth said. “They were very thankful. If you as a citizen want to do the same in your town, I’m happy to share those two documents. The worst thing for us as a new brand is to have one of our cars in a situation where it could hurt somebody because somebody didn’t know.”

One thing unique to the shop certification programs being rolled out by both Lucid and Rivian: A reliance on body shops in the program to handle mechanical work on their vehicles as well.

“Since we don’t have a dealer network service model, we require our [certified body] shops to take all the mechanical training,” Rodenroth said, something echoed by Rivian’s Frank Phillips. But he noted the bulk of mechanical work Lucid vehicles need can be done by one of its mobile service providers.

“I’m not asking our [network shops] to do brake jobs and tire changes and things like that,” Rodenroth said. “These cars don’t need as many things as an ICE vehicle.”

There currently is no database of repair times for electric vehicle manufacturer Rivian’s vehicles, but the automaker has personnel who can help shops with repair planning for Rivian vehicles.

“I have a team of folks who will assist our certified shops to make sure they are getting the information they need to get that estimate created,” said Phillips, collision program manager.

That group will work with insurers as well as Rivian’s 100-shop network.

“I use the analogy: I want to be the pillow between the insurer and the body shop,” Phillips said. “You can call those guys or chat with them online or text them or email them. Any method of communication.”