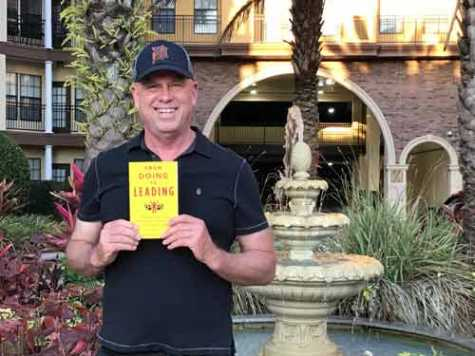 Detroit native John Stuef’s family was all-in when it came to the Motor City’s No. 1 industry.

His father worked as a design engineer for Ford Motor Company and his grandfather had a body shop for decades. When Stuef was only 12, his grandfather, Ben, died, and Stuef got his tools in the will.

After completing a collision repair program in high school, Stuef landed a job as a painter’s helper before holding every position available in a body shop. The first car he painted was a 1970 Camaro in orange with stripes, like the car from the TV series “Starsky and Hutch,” and the rest is history.

Stuef’s resume includes a stint as a regional manager for an MSO, as well as owning and operating his own shops for years. Today he lives in Tampa, FL, managing a shop and pursuing his other interests.

His collision career has taken him all over the U.S., including Wyoming, Texas, Florida, North Carolina and South Carolina, in addition to his beloved Detroit.

His interests include working as an industry consultant with a rapidly-growing social media following, and as the author of "From Doing to Leading: Your Guide for Inspiring People on the Front Lines," written with Dr. Amy Bradshaw. The book has been well-received by the collision repair industry and has been getting national acclaim for helping managers in all types of small businesses, not just body shops.

Sharing all of the knowledge that he’s accumulated during his four decades in the industry, Stuef focuses on leading leaders to success.

“If you’re in management, this book is a must,” he said. “We provide real guidance and focus on tangible things that can be used immediately. Too many leadership books offer theories, but no solutions and they don’t tell readers deliverables.”

Stuef has been successful because he knows what he doesn’t know and isn’t afraid to ask questions. He’s also an avid reader and a fast learner. When he was ready to embark on writing the book, he looked for a co-writer to introduce behavioral science in conjunction with his advice and accompanying stories.

Four years ago, Stuef was managing six collision shops in South Carolina when he began thinking about a book that could help managers and other administrators.

“There wasn’t anything out there that was comparable to what I envisioned. I saw genuine need for leadership advice tailored to managers, with a focus on the body shop environment. There’s a big difference between being a doer and a leader, and not everyone can make the transition successfully."

As they say, if you’re not planning to succeed, you’re planning to fail, so Stuef and Bradshaw devised proven methods that can truly help people to get more out of their team.

“We provide information about the science that’s behind motivation in a way that body shop people like me can understand,” he said. “I’m not some consultant who's never been out there on the front lines, because I talk from experience.”

When Stuef first began managing people, he ran into obstacles, and it took him years to figure it out. He’s still learning.

“I definitely learned a lot of what I know today by learning while doing, and I admit it that I made a ton of mistakes. So, hopefully I can help leaders to learn from my missteps, so that they won’t repeat them.”

Stuef isn’t afraid to take on new challenges. A few years ago, he took a break from working for MSOs and became a personal trainer.

During that time, he invented the SO-50, a suspension-training piece of exercise equipment currently used worldwide.

To promote his book and impart information through a different platform, Stuef produced a series of 25 YouTube videos with titles like “How Great Body Shop Managers Get Spectacular Results,” "How Great Collision Advisors Deliver Results” and “How to Make Firing People Easier.” Shop people are signing up every day as the series gains traction, he said.

A good manager can run an efficient operation, but how can they be great and exceed all expectations?

“I truly believe that most top-tier managers become great leaders, but they don’t have enough tools unless they can learn how to understand human behavior more deeply,” he said. “We provide our readers with a combination of advice they can use coupled with shared experience and smart insights into the science centered around motivation.