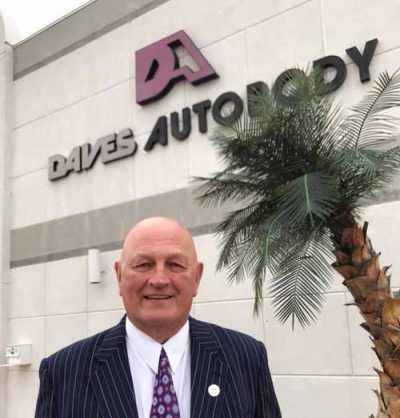 In addition to having been the owner and operator of Dave’s Auto Body in Galesburg, IL, for the past 42 years, Dunn also owns Masters Educational Services, a consulting and market managing firm that teaches people how to increase their work output and market their businesses. He is 63, but will work indefinitely, he said, because he still loves the business and is always looking for new ways to make it even more exciting, including developing products like Gator Sauce.

Dunn dropped out of high school at age 16 and opened his own shop in Knoxville, IL, after working as a general manager at a car dealership for two and a half years.

"Working there was a great experience because I received a lot of mentoring and was exposed to new cars and coaching," he said. "But then the place burned down, and that's when I opened Dave's Auto Body."

By doing the important things right, Dunn was able to step away from his business in less than a decade.

"At age 30, I was semi-retired and playing a lot of golf," he said. "Several articles appeared in local publications telling my story and people began calling me. They wanted to know how I was able to succeed while other owners were in their 60s and working 70 hours a week. That’s when I starting a consulting company that I did for 10 years."

At age 40, he established Masters School of Auto Body Management. People would come to him rather than him traveling to them as a consultant.

"It took off like gangbusters and we've been doing it ever since," Dunn said. "We now have our corporate headquarters here in Galesburg and we have students from all over the country. Now we teach management, leadership and marketing and have instructed more than 6,000 students within the last 22 years. We feature a basic four-day class and also have a wide range of other skills-based classes for things such as sales estimating, production management and marketing that are more specialized and average two to three days for both the dealership world, the independent body shop world and other industries as well."

Dunn realized long ago that the collision repair business is based on need rather than choice. Nobody wakes up in the morning yearning to visit a body shop or get into an accident to go to one. So, how can a shop build an ongoing relationship with the consumer and give them a reason to actually enter the facility?

Dunn is a strong believer in what's known as the "purple cow effect,” he said.

"If you drive by a bunch of black and white cows, that isn't remarkable, but if you see a purple one, you're likely to pull over and take a picture of it,” he said. “It makes a huge impression. Our Gator Sauce is our purple cow because people don't expect a body shop to have a sauce and it is definitely an attention-getter."

The sauce is purchased and relabeled through a company in Louisiana called Cajun Chef Sauces and is popular at local restaurants. The cost of providing it free to the public is approximately $20,000 annually, distributing 5,000 bottles of the product every year. Some shop owners must think Dunn is crazy, but it's a marketing tool that has paid for itself many times over, he said.

Dunn's sauce is now a big deal and has become a cult favorite throughout the county, he said.

"The Gator brand has led to other things within the Galesburg area under the group name of Gator Events,” he said. “It was developed to increase community involvement and has led to charitable events, including a benefit run and chef challenges where they create different recipes using the sauce. A few years ago, we did a Dave's Gator Sauce Challenge where we closed a street here in the shopping district of Galesburg and turned it into a big street fair [that] 5,000 people attended.

"I joke about a lot of my marketing efforts and say that the best things I've done involve giving things away," he said. "I have a registered trademark on something called Detail for Life, where we detail our customers' cars four times a year after we fix them. We detail 500 cars every month out of our detailing shop in a town of roughly 30,000 people and many of them are paid customers."

Dave's Auto Body does $5.5 million in sales every year out of a small town, which is unusual. He credits much of it to his unique marketing concepts, including one that involves a palm tree outside his shop.

"It's like the purple cow idea because palm trees don't grow in Galesburg, but we have one here," he said. "In California or Florida, that would obviously not be anything unusual, but here it's an attention-getter and people want photos taken with it all the time."