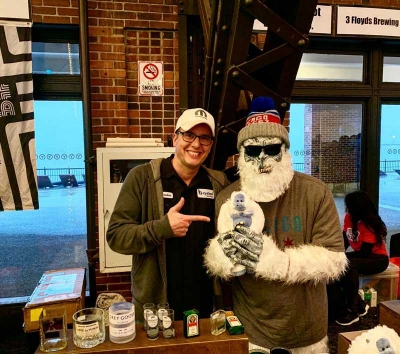 He does all of the marketing, and often displays and sells his glassware on weekends at greater Chicagoland arts and crafts festivals and beer festivals. People seem to love his products. “Mike’s teammate, Pablo Sandoval, can’t pronounce Yaztremski’s last name, so he just calls him 'Mike Whiskey,'" he said. “When I found out about it, I reached out to Yaz and told him on Facebook if he ever needed some glasses made out of whiskey bottles, we could do that at B-Cycled. He responded, I sent him some glasses and he presented a few of them to Sandoval in the clubhouse, which was great.” Eckenrode’s list of contacts has grown exponentially, including a network of golf course beverage carts attendants who save the mini/travel size glass liquor bottles which he upcycles into shot glasses.

“He figured I like alcohol at the very least,” he said. “I explained what I was doing and he told me that he could cut the bottles for me. He uses a wet saw that makes a clean cut and then I do the sanding, the finish work and the marketing, so it’s a one-man show. If I come up with a new idea, I don’t have to run it by anyone or get it approved---it’s just me.” CREF is a national nonprofit that supports collision repair educational programs, schools and students to create qualified, entry-level employees and connect them with an array of career opportunities.

Eckenrode was hired in 2009 as CREF’s associate director of development before being promoted to lead the organization in 2012. In his LinkedIn profile, he touts himself as a “facilitator of generosity within the collision industry.” Eckenrode never anticipated B-Cycled would take off the way he has, but he’s not complaining.

“I love seeing the finished product every time,” he said. “I am now featuring accessories like custom high-end wood boxes to hold the glassware and I am also turning liquor boxes, such as Johnnie Walker Blue Label, into coasters.”

He’s building a brand, making money and creating goodwill all over the planet. Looks like he’s captured lightning in a bottle!

If you are looking for unique and green gifts for your staff, clients, customers and/or fellow drinking friends, contact Brandon Eckenrode at BCycledBottles@gmail.com.