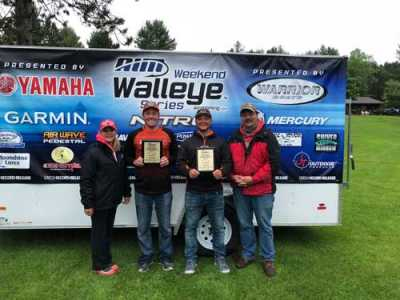 As Dylan, 25, continues his legacy by taking over the family shop from his father, Brian, who's preparing to retire, he focuses on his career in collision repair, but he's also crazy about fishing and the challenges it presents.

Earlier this year, Dylan and his fishing partner, Joe Bricko, won the Minnesota State Fishing Championship on Lake Vermilion, which enabled them to compete in the 2018 AIM National Championship Shootout on June 1--2 on Chippewa Flowage in Wisconsin. Only the best anglers out of three states---Minnesota, Wisconsin and North Dakota---get to compete in the AIM Nationals, Dylan said.

"They pick the top 10 in each state and by winning the state tournament, we qualified for the championship, and that's where we wanted to be,” he said. “If you want to be a respected tournament fisherman, you have to get in this one because only 30 boats compete, but there are some of the best fishermen in the country there."

Finishing third in the AIM Nationals, Dylan and Joe caught a total of 24.5 lbs. while the winning duo landed 32.49 lbs, which means that Dylan and Joe were only one big fish away from winning it all.

"First prize in this tournament is a new $50,000 fishing boat, and then it’s door prizes for the other top finishers" Dylan said. "It was good to get out there and compete, but you always want to win, obviously."

Chippewa Flowage’s third-largest lake is known as a "walleye factory"---a fish that Dylan has been pursuing relentlessly since he started angling as a young child.

"Walleye fishing is challenging because they're very versatile," he said. "They can be found in deep water and shallow water and know how to use infrastructure like trees, roots, aquatic plants---you name it. We are always looking at the walleye's behavior to find out where it might be and learn more about the fish, but they're unpredictable in many ways. Chippewa is also a very interesting lake that is 10 miles wide in many places with lots of tiny channels, little bays and small islands."

There's a lot going on for Dylan when he's not chasing walleye because Maki Body & Glass is always busy. Dylan multi-tasks and steps in when needed.

"I'm head estimator and production manager, but when things get jammed, I'll jump in and help with the production by fixing a bumper or whatever else it takes," he said.

Dylan's grandfather, Rayno Maki, started the business in 1952, back when the average repair was roughly $350. Today, his grandson knows that to repair today's vehicles correctly, it comes down to continual training and preparation---just like tournament fishing.

"We stress training in a big way, so everyone here is I-CAR-certified because we always want to be at the forefront of this industry," he said. "With tournament fishing, you have to be ahead of the game too because the competition is the best in the country. We prepare by getting out there on the lake before the event to practice (also called 'pre-fishing') and really study the conditions and where the fish hang out during certain times of the day."

Collision repair done right requires an eye for detail and a passion for the art of returning a vehicle back into its pre-accident condition. Fishing requires similar skills, and that's why Dylan loves both activities, he said.

"I get satisfaction from both, and that's why I love doing them. Doing a good job on a customer's car is like catching a big fish!" he said.

After finishing in third place at AIM National Championship Shootout, Dylan wants to compete again in 2019 and take the top prize home this time.

"We are going to have to get better before then so that we can qualify again," he said. "Right now we are ranked ninth out of 100 boats in Minnesota, but they only take the top five for the Shootout. We will need to have a few really good days to move up, but we're pretty confident and there's still plenty of time left."