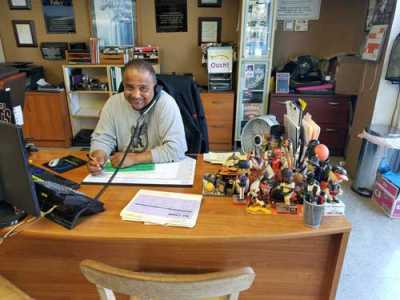 When George Melendez isn't writing estimates at Regal Collision in Vallejo, CA, he is working as a security specialist for the San Francisco Giants at AT&T Park.

When he works at the shop, he is estimating the costs of repairing a damaged vehicle. When he performs his role for the Major League SF Giants, he is using similar skills, he said.

"When I do an estimate, I'm thinking about potential issues with the car that may not be easy to find and make sure I look for everything," Melendez said. "When I am working for the Giants, I am also looking for issues that might occur in different parts of the stadium. In both positions, I have to be thorough and detail-oriented, so my career in the collision repair industry has helped me be a better security specialist for the team."

A lifer in the collision repair industry, Melendez has been the head estimator at Regal for the past five years, but has more than 35 years of experience in the industry. He is the only estimator at this busy shop, but works closely with Bill Hasma, the company's blueprinter.

"We work well as a team, like the Giants do," Melendez said. "I get a lot of help from everyone here, and that's why we succeed. Regal Collision is a top shop, and the Giants are a top team with three World Series titles within the last eight years, so I guess I surround myself with champions."

Melendez's biggest champion is his father, who introduced him to the body shop business in 1983 even though his plans were not headed in that direction initially.

"I was fresh out of the service and wanted to be a San Francisco cop, but while I was waiting to enter the academy, my dad asked me to come work with him at his body shop, G and M Auto Restoration," he said. "I started liking it and decided that I wanted to be an estimator, so I went to V-Tech, a school in Fresno, CA, to learn the trade. I noticed that most of the other students that were there were training to be insurance adjustors, so I learned about estimating and how their business worked as well. I learned how to estimate from the front bumper to the back bumper and everything in between, and the education I got there was invaluable."

After just one year on the job, Melendez was already running the shop, a position he held for the next 12 years.

"I want to thank my father for giving me a career in this industry," he said. "I have met so many great people over the years and I would not change it for the world."

A lifelong fan of the San Francisco Giants, Melendez started attending games at the team's original stadium, Candlestick Park, as a youngster.

"Foremost Milk used to give away tickets to the game on the sides of their milk cartons," he said. "We would drink all of the milk fast so that we could use the tickets. At that time, I lived only 1.5 miles from Candlestick Park, so we attended a lot of games in the 1970s and saw Hall of Fame players like Willie McCovey, Juan Marichal and Gaylord Perry, for example."

In 2005, Melendez attended a Fanfest event at the Giants' current stadium, AT&T Park, where he saw a sign that said the team was hiring people for different positions.

"It had always been a dream of mine to somehow work for the team, so I applied and after a few interviews, I got hired. For my first four years, I was assigned to doing security in the bleachers, dealing with the drunks and rowdy fans."

By keeping his cool and using logic while placating obnoxious and often drunk fans rooting for both teams, Melendez has been able to keep the peace in most cases, he said.

"Let's say a Dodgers fan is causing trouble," he said. "I will talk to him and say, ‘Look, you spent a lot of money to buy a ticket and come up here from LA. Why don't you just play nice so that I don't have to kick you out?’ Usually they will listen, but if they continue, I'm not afraid to get SFPD to escort them out of the stadium. I also tell them that if they try to come back, they'll be arrested."

For the past decade, Melendez has worked in the team's camera room, where he watches everything that goes on in the stadium and contacts security in the stands when needed.

"We have 260 cameras, and we save all of our footage because at almost every game there will be at least one civil suit filed for some reason," he said. "We can see every seat all the time and monitor each fan at the game, so it's a valuable tool for anticipating what could possibly happen next."

The Giants and Dodgers fans are well-known for not liking each other, but one American League team has the most confrontational fans in the major leagues, Melendez said.

"We don't play the Red Sox every year, but when we do, we really have to be on our toes,” he said. “The Boston fans are loud and they show up in force and they think they own the stadium. So we sometimes have to remind them that this is our home and if you come here, you better act right."

Over the years, the team has had to step up its security, which is how AT&T Park provides a safe environment for its fans, he said.

With definite retirement plans ahead for Melendez, he wants to work at Regal Collision until he's 67 and work for the Giants until he's 75.

"God willing, I want to do both of these jobs for a while and hopefully see a few more World Series games during that time," he said.