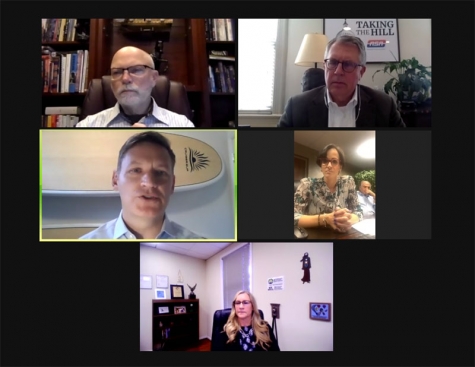 With more than a dozen states proposing legislation over the past three years related to the use of OEM collision repair procedures, why have nearly all of them failed to be enacted?

That was the question at the heart of a Governmental Committee panel discussion during a recent virtual Collision Industry Conference (CIC) this month.

One reason cited: Opposition to the idea of pushing for or requiring the use of OEM procedures from alternative parts industry.

“I think the biggest problem we have is there are OEM repair procedures that very blatantly deny the use of aftermarket or recycled original equipment parts,” said panelist Sandy Blalock, executive director of the Automotive Recyclers Association. “So we have very serious concerns that that would be pushed even more if any of these pieces of legislation get passed.”

Panelist Wayne Weikel of the Alliance for Automotive Innovation, a trade group representing the automakers that manufacture nearly all the passenger vehicles sold in the U.S., pointed out in some of the state legislative efforts, automakers “took parts off the table,” by agreeing to legislative language “saying that, notwithstanding what OEM repair procedures may say about parts, you’re supposed to follow the repair procedures.”

“As long as there’s anything out there that is telling people it’s not wise to use [alternative] parts, or that they do not recommend that they be used, this is going to be an issue for us,” she said.

“And that’s why you see why compromise on this will be difficult,” Weikel said. “Against all of my members’ views on parts, we tried to focus just on procedures, and even after we’ve done that, we continue to hear objections such as these. I can tell you, our manufacturers are not going to walk away from saying that the best part is a new OEM part. That’s just the reality.”

The insurance industry also pushed back against...

...proposed state legislation that would require them to pay claims based on OEM repair procedure.

Panelist Darrell Amberson of LaMettry’s Collision in Minnesota said his state’s association twice pushed for legislation that would have made it an unfair claims practice for an insurer to refuse payment for a repair procedure called for by an OEM.

The first year the bill didn’t even receive a hearing. The association then worked with insurers on some “watered-down” compromise language introduced in 2019, but even then insurers opposed the bill during a hearing.

Amberson said the state’s legislature has a high percentage of members who currently work for, or have previously worked for, insurance companies, including the committee member most critical at the hearing of the bill’s language.

“It didn’t get out of that committee,” Amberson said of the 2019 bill. “It’s been difficult to reason with some entities out there. I’m not saying every insurer is against proper repairs. But there are those out there that frankly are inclined to imply that it’s OK to essentially cut some corners. The phrase ‘case-by-case’ implies you can make a judgement, questioning the repair procedures the manufacturer established.”

New Hampshire lawmakers passed OEM repair procedure legislation in 2019, but it was vetoed by Republican Gov. John Sununu, who said the bill “would increase the cost of auto insurance premiums by limiting the ability of insurers to negotiate what is reasonable in the repair process.” Weikel pointed to what he sees as the irony in that argument.

Panelist Jina Petrarca-Karampetsos of the Auto Body Association of Rhode Island said the association successfully passed such OEM procedure legislation there in 2018 after spending “many, many years building momentum.”

The association has a history of...

...getting legislation enacted designed to ensure consumers have information and choice, she said. That includes an anti-steering bill, a two-tier "Class A" and "Class B" shop designation system, a total loss threshold of 75% that prevents a vehicle with lesser damage from being totaled without consumer consent, and a law that requires consumer consent for use of anything other than OEM parts for vehicles up to four years old.

“Knowledge is power, and choice is power,” Petrarca-Karampetsos said. “If you’re doing the right thing, giving consumers a choice is never going to be a negative in your business.”

The Rhode Island OEM procedure regulation is tied to the parts legislation. It originally prohibited insurance companies from requiring any repairer “to use repair procedures that are not in compliance with the recommendations of the original equipment manufacturer.”

But Petrarca-Karampetsos said in a compromise---based on opposition from the non-OEM parts industry---the bill was amended to say the requirement for automaker procedures applies only “when OEM parts are used.”

“It’s been a major success. And it was a compromise,” Petrarca-Karampetsos said.

Blalock said such compromise is not out of reach, particularly in states, like Rhode Island, that have generally viewed used parts as OEM, unless they were non-OEM originally.

Compromise on an OEM procedure bill in Washington State earlier in 2019 was also “very close,” she said.

“But I think the biggest compromise is we need to stop thinking we have to go pass legislation to protect every facet of our businesses,” Blalock said. “We need to stop going to our legislatures and asking them to protect a certain segment of our industry.”

Petrarca-Karampetsos said she disagreed with the idea that legislation is not necessary, given consumers’ lack of awareness and understanding of...

“They aren’t versed in this,” Petrarca-Karampetsos said. “They go to a shop. They expect to have their car repaired safely. They expect their insurance companies will treat them fairly. They’re not aware of the nuances.”

She said the association at one point took a year off from its legislative efforts to meet with insurers in an attempt to find “useful solutions” to issues of conflict, but there were no such solutions that the “insurers would implement without legislation,” she said.

“That has been proven here over and over,” Petrarca-Karampetsos said.

Amberson said he agreed that finding solutions short of legislation would be wonderful, but it’s very hard to accomplish, particularly when it comes to OEM repair procedures.

“Who among us are experts on this to the point that we can claim to be more knowledgeable about the proper repair than the vehicle manufacturer,” Amberson said. “Hence, we as repairers are caught in the middle, and unfortunately have to pursue legislative solutions to be able to fix cars properly, to protect ourselves as well as the consumer.”

More in this category: « Objections to Payment and Requested Procedures Outlined in SCRS Class End of Year Auto Sales Pick Up Due to Pickups »
back to top