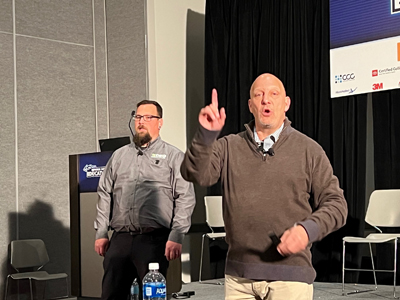 Negotiating with insurers is just part of the repair process and nothing to dread, according to Mike Anderson of Collision Advice.

“I’m seeing more and more friction between shops and insurers,” Anderson said. “The goal is to give you negotiation strategies to reduce that friction and get paid more.”

Anderson and Gredinberg gave tips on how to approach negotiations from a fact-based standpoint---with documentation, and where to find it---and finally discussed a collision repairer’s options when an insurer still won’t pay for work.

Anderson said anyone can get a copy of the full presentation by emailing his assistant, Tiffany Driggers, at tiffany@collisionadvice.com.

“This presentation is in no way anti-insurance,” Anderson said.

Many people make the mistake of thinking of negotiations as a negative thing, like a fight or an argument, he said, but they’re a discussion aimed at reaching an agreement.

The negotiation begins the moment you interact with the customer, he said. “The customer is really the boss. Get the customer believing in you before you enter into conversation with the payer.”

Anderson suggested reviewing the vehicle’s owner’s manual with the owner, to show the owner exactly what the automaker says must be done to properly complete the repair. If the manual isn’t in the car, it can be downloaded from the DEG’s website, www.degweb.org.

If your shop is not in a DRP and the insurance company is causing a delay, call the customer every day, Gredinberg said.

“Tell the customer their car is on hold after disassembling, and they may want to call to expedite the claim,” Anderson said. “After you’ve called them two or three days, the customer will call and either get their insurance to pay, or they’ll pay it themselves. Either way, you get the car out.”

When writing an estimate, it needs to tell a story, with good line notes and quality photos.

“Line notes are critical to show why you support that charge,” Gredinberg said. “It helps reduce back and forth on a phone call.”

Photos should capture damage head on, use aids to show dents, use proper lighting and have a date stamp if allowed, he said.

Attach OEM repair procedures to the estimate, as they can change frequently.

Anderson then went over his “Rules of Negotiation.”

“It only matters what you can prove, substantiate or justify,” he said.

Is it required to restore the car to pre-accident condition? Is it included in any other labor operation? Is there a pre-determined time in the database? If not, what is it worth?

“These are questions based on fact, not emotions,” Anderson said.