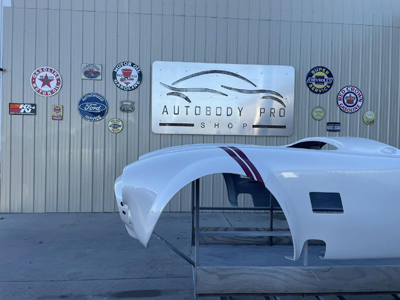 Isaac Hall, 30, was told from day one to stay out of the family’s body shop, Autobody Pro Shop in Harrisonburg, VA, but eventually, the plans changed.

Today, he runs the shop established 25 years ago by his father, Kip Hall, 56. On Dec. 22, the shop will celebrate 25 years in business to thank a community that has supported it since 1997.

Autobody Pro Shop performs every aspect of collision repair and also takes on several car restorations annually. It started in one bay at another shop out of town before finding its own facility, Kip said.

“I was working as a detailer/buffer at a large auto auction and I decided I wanted to pursue collision repair, so I started going to school at night," Kip said. "I was working three jobs at the time, but when I found out that a guy had an available bay out of town, I decided to rent it for $400 monthly.

"We had two kids and no money, but I jumped right in and today we have two buildings and a 11,000 square feet of production space. It has been a great run and we plan on doing this as long as we can.”

Kip is delighted his son decided to join the family shop, but at first, he wasn’t crazy about the idea.

“I tried to deter him, but that did not work,” Kip said. “He really knows how to handle the insurance side of the industry and I can witness him getting better at it every year. He educated himself and has excelled and I am really proud of him for what he has achieved in a relatively short time.”

Since Isaac is only 30, he still has many years ahead of him to build the business and help the shop flourish.

“My parents did not want me to work here,” Isaac said. “They didn’t want us to be silver spoon kids, so they told us to go out and find our own careers. But, seven years ago, I realized I like this business and I want to be a part of it. So, I went to school at night and learned everything I could.”

Today, Isaac is the director of operations at the shop and does some of the restoration work himself, which he loves.

“We love breathing new life into these rare beauties,” he said. “Currently, we are restoring a 1967 Camaro that is going to get a ton of attention and we love this part of the business.”

Isaac is happy to be a body shop owner and has a great relationship with his valued employees, he said. “We had a fry fish here the other day, and we’re always looking for other ways to reward them for the awesome work.”

Twenty-five years is a long time to keep a body shop rolling along through recessions, but by doing what they love and pursuing quality work, this shop's team looks fondly toward the next quarter century.

“We love what we are doing and we wouldn’t want to be in any other industry than collision repair,” Isaac said.