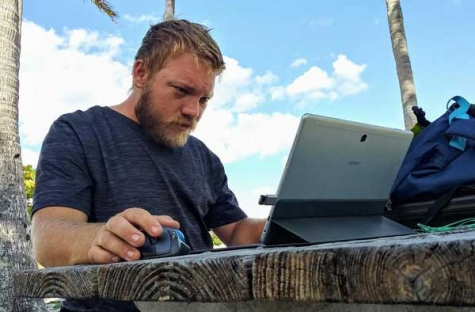 Some auto body shops appreciate insurance adjusters and their role in the collision repair industry, while others don’t necessarily feel the same way. But all seem to agree it’s a necessary job.

In the end, everyone wants the same thing---the safe repair of a vehicle back to its pre-accident condition.

According to Indeed.com, the responsibilities of an auto damage adjuster include evaluating the damage done to a vehicle and then determining what the insurance company will pay. They also add “a claims adjuster job is very stressful as it comes with lots of highly demanding activities. However, when you put in the hard work and dedication, the rewards far outweigh all the tough demands of the job.”

Chris Stanley, 36, is an author, career coach/mentor and the founder of Insurance Adjuster (IA) Path, a company that trains and mentors auto adjusters.

He lives on a 42-foot sailboat with his wife and three kids---ages 12, 8 and 1---who are homeschooled. He enjoys the freedom and loves “traveling the open seas and feeling small in our big world,” he said.

In addition to writing a series of books about insurance adjusters, he also writes Christian devotionals, memoirs, kids' books and a variety of non-fiction.

Stanley was working as an adjuster for a PDR company in Colorado when he was recruited to become a supervisor at the same organization.

“The business grew to the point where we were working with 100 shops and dealerships and they needed someone to oversee the work,” he said. “It was definitely a major mental shift, where I went from writing estimates to managing techs, and after a while I said I want my life back! Plus, it was cold in Colorado.”

So, he purchased his boat and began enjoying better weather in Florida, with a career change in his immediate future.

“One of the great things about this lifestyle is .we can go to wherever we want to be---whether it’s the Keys or West Palm Beach,” he said. “Every year I always ask my children---do you want to live in a house on land or stay on the boat? They always go with the boat.” Stanley lives and works on a boat with his wife and three kids in Florida.

Around that same time, Stanley saw training programs for independent insurance adjusters were scarce or difficult to get into.

“I tried to help a friend who wanted to become an adjuster, and no one would take him, even though I taught him the basics," Stanley said. "They told him you don’t have any experience. So, I started looking online to see if there was any information about how to enter the industry, but it was all about property and nothing about cars.”

Since 2016, Stanley has mentored more than 2,500 people, to create the next generation of independent adjusters and auto damage appraisers. His go-to book is called the "Auto Adjuster's Playbook," which Stanley called the industry’s Bible.

“It is based on a proven method to teach new people how to learn to write estimates," Stanley said. "It has been used to teach hundreds of students through IA Path's online training course, called the 'Auto Adjuster's Path.'

"Most people who venture into being an auto damage appraiser or body shop estimator are overwhelmed with learning about the parts of the car, repair processes and how to not look stupid," he continued. "This book tells you what you need to know with plain English. The 'Auto Adjuster's Playbook' is field tested and contains industry recognized training and instructions by a 13-year veteran and reviewed by top industry leaders prior to its release.”

Stanley’s IA Path program is designed to get people up and running fast, he said.

“Whether it’s a Millennial looking for their first career or someone looking for their second or third career, I want to see them get work within 90 days in a rewarding industry and write content to help them navigate their journey," he said. "We bring them in and get them to the point where they’re doing their jobs correctly, doing mock claims and handling the entire process from start to finish.

"Whether an adjuster who is working as a staff or independent adjuster handling property, auto or desk claims---liability, bodily injury, etc.---there will be always be companies looking for their skillset.”

This past summer, IA Path hosted its first Adjuster Job Fair to allow adjusters and appraisers from all aspects of the inspection industry to get interviewed one-on-one with dozens of hiring companies.

“One of the biggest hurdles for adjusters to getting work is getting in front of enough companies that have work opportunities,” Stanley said. “We decided to bring the companies to the adjusters so they wouldn’t have to track them down. The event was 100% online utilizing a state-of-the-art platform and interviews will be conducted using the industry-leading Zoom technology. Adjusters scheduled online face-to-face interviews with 30-plus nationwide and regional hiring companies.”

The job fair was brand new territory for Stanley, but he’s never been afraid to take on new endeavors like this one.

“This type of event has never been done before online in our industry, for adjusters,” he said. “Typically, events are centered around .the hiring companies or technology companies, but we wanted this to be all about the adjuster.”

“We have big plans for this platform in the future, but we’ll start with this first event and the follow up during the first quarter of 2022," Stanley said. "The pricing was designed to offer opportunities to the adjusters year-round, not just for the three days of live online interviews.”

When he isn’t motoring around on his boat, Stanley is focused on creating the independent adjusters of the future.

“It’s a good job that can lead to a long and wonderful career, so if you’re smart, fast on your feet and detail-oriented, this might be a good match for you," he said. "And I can show you how to do it!”