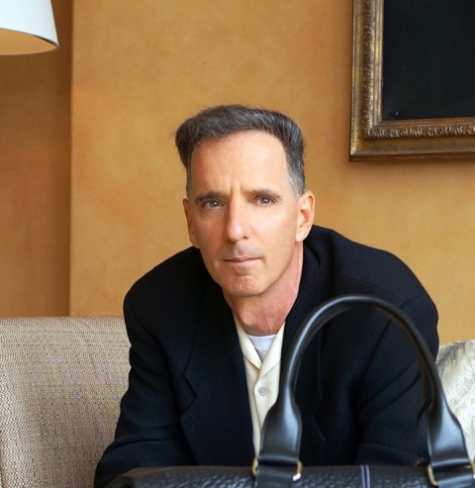 Art, Innovation and Car Design Collide in the Life of Michael Santoro

I think everyone can agree a well-designed car is a piece of art, like a Donatello or a Rodin.

While it’s true automobiles are created to transport people and things, that doesn’t devalue their design or aesthetic appeal, which is why some call them “sculpture in motion.”

A vehicle starts out as a series of illustrations that eventually become a clay sculpture. Throughout the process, a wide variety of sometimes conflicting priorities must be considered when creating a car design. These include the needs of the driver and passengers, the ability for the design to be manufactured and the hopes and dreams of the designer who created it.

Michael Santoro of San Diego, CA, is a former automotive designer who now teaches car design. He founded and oversees a company making Apple accessories, which has met with huge success, and is also a highly-respected artist known for paintings of his favorite Formula One drivers, including Niki Lauda and Ayrton Senna.

A native of New York City, Santoro graduated from the world-renowned High School of Art & Design, where he was a member of the first-ever industrial design high school program in the country.

After graduating from Pratt Institute with a bachelor's degree in industrial design, Santoro was accepted as the first-ever post-graduate design intern at Chrysler Corporation where, upon completion, he received an offer to join the staff. Santoro worked on the 1996-2006 Jeep Wrangler. This is a preliminary sketch of a sportier version of the iconic vehicle.

Santoro spent six years as an automotive designer at Chrysler, where he created the groundbreaking cab-forward exterior design of the 1995 Car of the Year, the first-generation Chrysler Cirrus and its sister vehicle, the Dodge Stratus. Before leaving Chrysler, Santoro penned the 1996-2006 Jeep Wrangler, bringing it back to its iconic roots while pushing it forward into the new century.

Landing a job as a car designer with Chrysler at 21 was unheard of. As the new kid on the team, Santoro was able to bring a young and fresh perspective to everything he worked on for the carmaker.

“I knew that this was a great opportunity and a dream job,” he said. “You have a better chance of playing in the NFL than you do becoming a professional car designer in the United States, so I was excited to get a chance.”

Santoro was able to see a car design team in action and learned as much as he could.

“Within a given studio, each designer creates his or her own proposal. You’re competing with your coworkers for the opportunity for your design to go into production.” Most production programs are on four-year cycles. Once the vehicle is in production, they will normally do a facelift every two years, at which point they will do things like tweaking the front and rear fascia or adding new wheel options.

For a car’s exterior, designers work with industrial sculptors to create full size models in clay over a wood and foam structure. Once the model is complete, it’s presented to upper management, who choose from the various proposals presented.

In this case, it was Chrysler CEO Lee Iacocca and Vice Chairman Bob Lutz, among others. For the Cirrus/Stratus program, eight full-size clay models were done. The board liked Santoro’s design for the Cirrus and it went into production, eventually chosen as the 1995 Car of the Year.

Did Santoro get a bonus when he and his team received the highly prestigious award?

“No, but I got to see my design made real and put into the world. That’s a happiness no one can ever take away.”

When a car is created, a series of safety features are integrated into the design with a goal of protecting the inhabitants while still looking cool.

“Much of what we made was predicated on how to mass produce it and whether or not it was safe,” he said. “We were always made aware of it and communicated with engineering on a regular basis.

"We also had to look at any design from a collision repair perspective. When the car gets in a wreck, how will the technician be able to fix it? Will they have to remove a lot of parts to do the job? What are the replacement costs? These are the things that any design team has to keep in mind all the time.”

“We concentrated on using fewer parts with a focus on things like fit and finish, as well as making everything lighter and more aerodynamic. If a bumper assembly consists of nine parts as opposed to 20, for example, the replacement cost will be lower and the repair logically will be easier when it goes into the body shop.”

After six years with Chrysler, Santoro returned home to New York City, where he went from designing automobiles to airplanes, as a consulting designer for Walter Dorwin Teague, America's oldest design consultancy. There he worked on numerous programs including creating conceptual design interiors for Boeing Aerospace and the production interior for the Gulfstream G5 aircraft.

After two years in that position, Santoro returned to automotive design work, as a consultant working on the Vector M12 supercar and Vector M12 "American Anthem" show car shown at the North American International Auto Show.

Additional projects followed, including the Lamborghini Jota show car. They made a grand total of 14 Vectors with 12 still in existence, which means you might see one occasionally at a SEMA Show, for example.

In 1999, Santoro took his skills designing cars to create the MacCase, the company that would produce the world’s first Apple-specific case. It was an instant success and lauded for its originality and custom fit. MacCase now features the Premium Leather Collection and ships to Apple users worldwide.

Santoro’s painting career began when he was only 17 in New York City.

“I did a drawing and took it to a local gallery called l’art et l’automobile and the owner, Jacques Vaucher, encouraged me to do more,” he said. “That piece sold quickly and pretty soon Jacques was asking for more art. It was pretty cool to be a successful artist in New York as a teenager!” Santoro’s career as a car designer has been written about in publications like AutoWeek, Automobile, Road & Track, the Detroit Free Press and Car Styling. He was also featured in a New York Times article in 1994, “The Designers Who Saved Chrysler.”

Santoro has also been a part of student design reviews at the College for Creative Studies in Detroit, MI, and Art Center College of Design in Pasadena, CA, as well teaching transportation design at Pratt Institute in New York City.