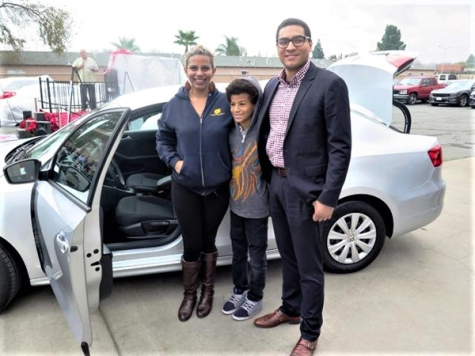 After the Donation: Veteran’s Donated Car Enables Her to ‘Pay It Forward’

When deserving people get fully refurbished vehicles from auto body shops, whether MSOs or independents, it is always a major win-win for the industry and the community.

In this series, we follow up to find out how these vehicles have helped these deserving people as they pursue their dreams and achieve their goals after they've received their cars.

In this case, TeJae Dunnivant, a U.S. Army Reserve veteran, and her son were awarded a 2014 Volkswagen Jetta from Mike's Auto Body in northern California's East Bay in 2016. The car was donated by CSAA Insurance and the giveaway was sponsored by the Blue Star Moms while Dunnivant was working as a veteran advisor at the University of California, Berkeley and pursuing her degree.

At the time, Dunnivant needed the Jetta to get to and from school and other chores, but when life threw her a curveball, her vehicle from Mike's Auto Body became even more vital to the survival of her and her young son.

Three months after receiving the vehicle, Dunnivant found out her son Asad, then 12, had leukemia.

"In February of 2017, we got some tough news and of course that was a major deal," she said. "When I initially wrote my letter for the vehicle, I stated that I needed the car to go to the grocery store and food banks, which is hard to do on foot. After a while, we began using it to go back and forth from Albany to Oakland Children's Hospital, so the Jetta became a lot more important lifeline for us and a more major part of our lives."

Now, let’s fast forward to 2022 and check in with Dunnivant and her son.

First off, Dunnivant got a bachelor's degree in media studies from the University of California, Berkeley. She also worked for one year at Contra Costa College in San Leandro, CA, in its Veterans Center.

Then, she moved down to San Diego, CA, to work for Operation Homefront, a national nonprofit whose mission is to build strong, stable and secure military families so they can thrive in their respective communities. In 2022, Dunnivant is using her donated vehicle to pay it forward to others as an account coordinator, working in the field office program.

“We do so much great work for this national non-profit,” she said. “I am in charge of California and Hawaii, working with a team to give backpacks and holiday meals or gift cards for food during the pandemic. We are definitely one of the country’s top-rated nonprofit organizations helping military veterans to succeed and strive as opposed to just getting by."

For more than twenty years, Operation Homefront has provided programs that offer relief, through critical financial assistance and transitional housing programs; resiliency, through permanent housing and caregiver support services; and recurring family support programs and services throughout the year that helps military families overcome the short-term bumps in the road so they don’t become long-term chronic problems.

At Operation Homefront, 88% of expenditures go directly toward delivering programs and services to the military families who need it the most.

Another part of this exciting update is about Asad. He is now 15 and a sophomore at Coronado High School, where he plays volleyball and is maintaining a 3.5 GPA.

“He is doing very well,” Dunnivant said. “There are no more reoccurrences of the cancer following some rigorous chemotherapy. He sometimes has issues trying to retain information, so we’ve been working with neurologists to help with him in that area. Asad has been taking on a heavy load of classes and that’s why he will be graduating from high school one year early, in June of 2023.”

Like his mother, Asad has a dream to make the world a better place to live.

“He wants to create change in society, and it surely is special,” Dunnivant said. “He loves his debate class and isn’t afraid to get up in front of people to speak. He was exposed to a lot of positivity when I was attending Cal and gravitated toward people who are willing to take stands about things that matter to them. His plan it to attend community school for the first two years, then transfer to a four-year school to get a B.A., before going to a top law school.”

Another positive experience in TeJae and Asad’s lives relates to their donated vehicle. Their 2014 VW Jetta is still running well and has become a huge part of their success story.

“We still rely on this car every day and it always comes through for us,” she said. “It’s enabled me to do the important things I am achieving in my life. Everything has come full circle; I received a hand up from the people at Mike’s Auto Body and now I am helping people myself. Without this car, it would have been pretty difficult to do all these things, and when I look back at it, it surely is very satisfying and fulfilling. I’d like to thank Sal, the Rose family, CSAA Insurance and the Blue Star Moms!”